Labour: too many messages, too much haste, too little frequency

It’s undeniable that the media had succeeded in demonising Jeremy Corbyn in the minds of many voters, over a prolonged period, well before votes were counted in last week’s General Election. But in my view Labour created its own technical problems in the way it presented itself.

The party allowed the media to interpret its plans for the economy and society as an overnight revolution, rather than framing its aspirations within a timeframe which would be seen as more realistic. The reality of what Labour would actually have done – and when – is irrelevant: once in power, they could have turned on the after-burners or worked to a safer pace as necessary. But, persuaded by combined media forces, voters feared that the economy was about to be handed over to a Mad Max-type figure.

For instance, judging by some TV vox pops, many people accepted from the MSM that a Corbyn government would bring in a very damaging 4-day week in short order. That’s not what was said. It was a much longer-term aspiration, for working people across the whole economy. But that wasn’t made sufficiently clear, sufficiently often. 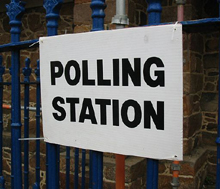 The media grabbed the commitment and shook the life out of it, turning it into a pledge to force workers to spend their afternoons watching daytime TV, while the NHS collapsed. The rationale wasn’t explained anywhere near often enough by the likes of John McDonnell. Just saying it once or twice was never going to do the job. If insufficient time was available to make it clear to the audience, it shouldn’t have been mentioned.

How do I know this? I worked for over forty years in planning the media side of (often major) advertising campaigns. Sophisticated advertisers know only too well the primacy of the three most critical components of a media campaign strategy: Impact, Coverage and Frequency. The impact a campaign message delivers depends on how it is conveyed in terms of noticeability – whether it’s attention-grabbing, memorable, etc.; the coverage achieved relates to how well-targeted the specific message is, to maximise exposure to as high a proportion of the target audience as possible; and the frequency of the campaign is a measure of the opportunities-to-see (OTS or OTH for opportunities-to-hear) the message.

In the case of an election campaign, impact isn’t a problem if the policies are clearly enunciated and presented with passion; high coverage is often a given, with media eager to gobble up and regurgitate every little tidbit; but effective frequency is much harder to achieve – and usually more important than the other two components.

That’s why Boris Johnson stuck to his monotonous “Get Brexit Done” line. His victory was a triumph of frequency over coverage. In my estimation, the parties were roughly even-Steven on achieving impact and coverage via broadcast and social media. Maybe Labour put a little too much faith in social media as a way of targeting their core audiences. Where possible, Johnson shunned really in-depth interviews which might divert attention away from or dilute his single-minded message. Right from the start of the “Leave” campaign with its infamous “£350m a week” message, Tory blatant untruths and weaknesses in police re-recruitment, replacement of nurses, broken promises on housing, etc. were batted away or avoided like the plague.

The opposite was the case with Labour. Their pot-shots at Tory failings often hit home; they were good on impact, with so many passionate speeches; but, beside the multi-choice Brexit stance, the sheer fragmentation and complexity of their alternative policy messaging was such that the target audience were given too much work to do. People didn’t have the time or inclination to decipher what exactly Labour was on about. Sometimes it’s best just to keep quiet. “For The Many, Not The Few” made a good start but quite soon became subsumed to daily unexplainable promised goodies. Waving the grey costings booklet about only complicated matters still further: the man on the Clapham (or Bassetlaw) omnibus was not going to write off for a copy.

The other day, Len McCluskey, General Secretary of Unite, writing in Huff Post, talked about ” … the incontinent rush of policies which appeared to offer everything to everyone immediately, and thereby strained voter credulity as well as obscuring the party’s sense of priorities”.

Much more focus: that’s what would have won the day on the policy front. Taking the four day week as an

example again, there simply wasn’t enough airspace to clarify it often enough as a longer-term aspiration. It was manna from heaven for the deliberate misinterpreters of Fleet Street. These add-ons were policies to be whispered in muted tones at Fabian Society meetings or in Facebook closed user groups. First, get into power – the great lesson taught by one Tony Blair.

A gradualist strategy wouldn’t exclude the possibility of bringing in the whole Corbyn shopping list, ultimately. But promising too much, too soon, is just a recipe for disaster. The ad. business is full of acronyms, one of its most memorable being K.I.S.S. – “Keep It Simple, Stupid”.

In the sense of keeping it simple, Labour Isn’t Working. Now where have I heard that before?

Revising the packaging of a brand is a sure-fire way of rekindling interest in a product that has flagging sales.

Having earned a living in marketing all my working life, I’ve often been involved in ad. campaigns that have been not so much about launching a product, as about “old product development”. Perhaps the most memorable for me was Lucozade, where in 1982 I was part of the team at the Leo Burnett ad. agency which re-positioned that (sugar-and-water) drink so that it would no longer be seen only as an “in sickness” tonic. Before the relaunch, Lucozade itself was in very poor health. But the bottles were re-designed, cans began to appear, the labelling changed, the price went up to pay for our TV adverts. – and the rest has been history …

When Vincent Tan bought Cardiff City (the “Bluebirds”) in May 2010, there was very little wrong with the product. Tan promised £100 million investment in the football club, to include a new stadium and a new training ground. All that has come to pass, Cardiff spent last season in the Premier League and, despite the fact that they were relegated back to the Championship after just one campaign, of late Tan has been prepared to take out his cheque book whenever necessary to bring in new players.

Now clearly this billionaire didn’t become so financially successful by being over-sensitive about people’s feelings. One of his more outrageous actions, in December last year, was to sack the coach who had guided Cardiff into the top flight, Malky Mackay being generally acknowledged to be the best manager the club has ever had. The pretext was that Mackay was promising to bring in new players, without consulting the owner, shortly after his own assistant had been sacked for an apparent overspend. It all sounded like financial mismanagement and poor communication systems within the higher echelons of the club. An inspiring leader of men, with more than a touch of genius when it came to the nitty-gritty of football strategy and tactics, Mackay and his talents were wasted on the bonfire of Tan’s vanities.

But Tan had infuriated the supporters even more by striking a blow at the very essence of the club – its colours. Under what has proven to be a quite erroneous impression that changing the kit colour to red would make the Bluebirds more attractive to potential new supporters in the Far East, Tan insisted that the club kit be changed from blue to red.

The fans’ fury was manifest in all sorts of ways, including marches in the city centre, letters to the press and a storm of anger on social media. But strangely the most effective and visible show of discontent has been a kind of Ghandian passive resistance. Supporters have simply refused to wear the new colours. Each home match is surrounded by a sea of blue. 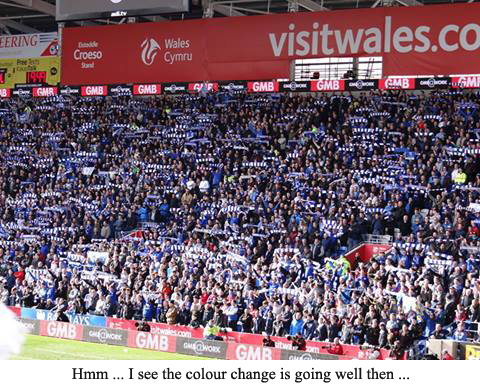 What Mr. Tan doesn’t seem to get is that the fans are investors too. Aside from their purchase of season tickets, theirs is an emotional investment, a burning passion mostly founded in a very strong sense of identification with the city where they live, were born or in some other way identify with. In Cardiff, a capital city into which all aspects of Welsh culture are continuously funnelled from the surrounding valleys, that passion is more intense than is found at most sporting grounds.

This is what occurred to me last night, as I sat listening to the commentary of the first match of the 2014/15 season, an away game at Blackburn Rovers, which ended in a 1-1 draw. So many new names to get used to – new players signed during the summer. Little do the new boys realise, I thought, that there’s a secret weapon waiting for them when they play their first match at the Cardiff City Stadium, against Huddersfield on August 16th.

The roar of support from the Cardiff fans takes everyone by surprise; it’s often referred to by radio commentators visiting the ground for the first time. It’s intimidating for visiting teams and must be worth at least a one goal advantage to the home side. It’s what the Cardiff City brand is really all about. Players, managers and owners will come and go – it’s passion and heritage that makes this product what it is. Each fan is caught by a different set of emotional ties in supporting Cardiff City. The passion has an ugly side, I suppose, in that Cardiff supporters en masse have got a reputation for being prone to violence at away games. But even politicians aren’t immune from it – it’s what got ex-Labour party leader Neil Kinnock forcibly removed from his seat at the Fulham ground last season.

Defacing this cultural icon by changing the colour of the team kit may appear a deranged act; but in reality it’s probably just a marketing own goal. Longer term it won’t affect the club. No new owner in his right mind would decide to stick with the colour red in the face of the tide of blue that floods into the Cardiff City stadium for every home match. Indeed, fiddling about with the shirts and shorts just makes the supporters even more determined to protect their heritage: the more Tan says red, the more the fans say blue.

There never was anything wrong with this particular old product. It’s nice to have all that money spent on the stadium; it would be good to be back in the “Prem”; but ironically none of that really matters to Cardiff City’s main consumers.

If you really want to see whether Cardiff City is in need of some old product development, just go to a home match, stand in the crowd – and look around.