The comings and goings of puny political plagiarism

“The age of the internet, where everything is connected, has made plagiarism both easier to commit and more difficult to hide”, wrote Jeremy Gavron in The Guardian a couple of years ago, though he went on to acknowledge that what appears to be plagiaristic can sometimes be explained by simple coincidence.

The most memorable phrase in ex-Chancellor Sajid Javid‘s otherwise fairly flat resignation speech on February 26th was undoubtedly “comings and goings”. The word “comings” was clearly a sideswipe at Prime Minister Boris Johnson‘s seemingly utter reliance on his SpAd (the increasingly popular contraction of “Special Adviser”), Dominic Cummings, in matters of both governmental policy and personnel. Cummings it was, so the rumour mill had had it, who enjoined the PM to insist Javid allow his own team of advisers at the Treasury to be replaced by a team specified by No. 10.

His “Cummings and goings” pun was greeted with loud hilarity in the House.

And it was also lauded on Twitter, drawing scores of hashtag quotes.

Now, other than writing this piece, I don’t want to make a Big Thing about this. But I couldn’t help noticing that a reply I’d made to a tweet by political eminence gris Andrew Neil – albeit some nine days before Javid’s punny pot-shot – bore more than a passing resemblance to his hilarity-inducing witticism.

It may just have been a case of “great minds”. Perhaps I should take it as a compliment. Or maybe I should give it the full whistleblower and expose his pun-pinching to the wider world?

I’ll never know the truth of the matter. But Gavron was certainly right. Social media offer rich pickings of royalty-free material for those seeking a telling phrase, an unusual take on a topic or a particularly bon mot.

Nowhere more so than in the field of politics, where words undoubtedly exert more influence over the comings and goings of our daily lives than in any other field.

One liners from this year’s Edinburgh Fringe

The top fifteen funniest jokes from the Edinburgh Fringe:

2. “Trump’s nothing like Hitler. There’s no way he could write a book” –
Frankie Boyle 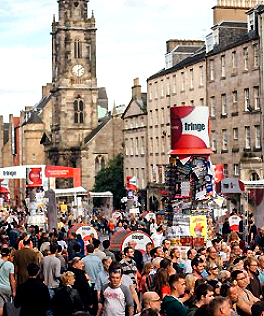 4. “I’m looking for the girl next door type. I’m just gonna keep moving
house till I find her” – Lew Fitz

5. “I like to imagine the guy who invented the umbrella was going to call it the ‘brella’. But he hesitated” – Andy Field

9. “I wasn’t particularly close to my dad before he died … which was lucky,
because he trod on a land mine” – Olaf Falafel

10. “Whenever someone says, ‘I don’t believe in coincidences.’ I say, ‘Oh my
God, me neither!”‘ – Alasdair Beckett-King

11. “A friend tricked me into going to Wimbledon by telling me it was a
men’s singles event” – Angela Barnes

14. “I wonder how many chameleons snuck onto the Ark” – Adam Hess