How do they do it? There’s already been enormous advance praise for the quality of the animation in the sequel to the Oscar-winning smash hit, Frozen.

How Disney‘s artists managed to achieve such powerful emotional effects in Frozen II – which launches today – has been the subject of numerous articles in print and on many leading social media sites. But curiosity about how the Disney animators achieve their unmistakable style is nothing new …

Digging through our family archives again, I’ve stumbled on this

wartime assessment of a 1941 Disney movie called The Reluctant Dragon. The film was put together with the express purpose of giving fans an insight into the methods they used back then.

“Personally I’d prefer not to know Disney’s studio secrets, because it spoils the illusion”, says the 1941 reviewer.

But in the movie’s opening sequence, the following on-screen explanation suggests that the journalist’s opinion is by no means typical:

“This picture is made in answer to the many requests to show the backstage life of animated cartoons. P.S. Any resemblance to a regular motion picture is purely coincidental”.

The review was published in the Daily Express on Thursday, September 4th, 1941. The Reluctant Dragon came out in the darkest depths of World War II – and must have raised the spirits of US and UK audiences which were in dire need of some light relief. 72 minutes long, it too uses special effects which were ahead of its time, incorporating black-and-white and colour, mixed with both animation and live action.

The dragon in question is the subject of a children’s book written by our fictional hero Robert Benchley, whose wife decides that he’s going to present his story to Walt Disney. The pair blag their way into the Disney studios and whilst there Benchley gets to see the Disney artists and voice actors at work, whilst also viewing five recent movies.

As well as helping to keep alive the Disney brand’s magical magnetism, Frozen II continues what seems destined to become a long-running franchise.

Frozen, which opened in 2013, is the highest grossing animated film of all time.

I didn’t last long as a copywriter. About six months, in fact.

The old man who was head of the team of wordsmiths at the Downton Pulford Compton ad. agency thought my headlines and body copy were a bit long-winded. “Think telegrams”, he advised. That’s all he said. A bit short and sweet. But I kind of got what he meant: keep it simple.

Donald Trump seems to appreciate the power of keeping it simple. His modern day telegrams – Make America Great Again, Fake News – and the others, communicate simple, telegrammatic, posterised messages that slip easily into the memory bank without raising the slightest alarm or prompting too many questions among his followers.

Who wouldn’t vote against the simple injunction to “Make America Great Again”? Or, in the case of Brexit, to “Take Back Control”? The K.I.S.S. principle is tried and tested.

Back then telegrams were still quite popular, though the UK’s main telegram service ended in 2003 (interestingly, it’s still possible to send one, via telegramsonline).

Telegrammatic communications have been a bit out of fashion for quite a while, perhaps with the exception of that most powerful of advertising media, posters. Posters have a unique ability not to divert attention away from the basic message with snazzy video and dialogue that makes you think “What the hell was that all about?” They distil, focus and cut through. Just like the telegram did. When each word cost money, people were short and sweet to save cash. But the message was concise – and therefore clear. Stop.

Never was a telegram shorter and sweeter, perhaps, than in the case of Oscar Wilde‘s legendary exchange with his publisher, enquiring about the success of his most recent book. He sent “?”, to which the publisher replied “!”

Downtons handled a large proportion of the UK advertising for cinemas – not the ads. that appear on the screen, but the ads. in the local paper that give details of what’s on at the pictures. In addition they publicised film launches – and other stuff, like sales of confectionery and ice cream.

For quite a long time I was given menial tasks – just writing body copy for leaflets. It was the era when cinemas were converting to multi-screen – so quite a significant period in the history of the UK industry. Lots of factual leaflets were needed for door-to-door distribution. No-one in the department wanted to be involved with rubbish like that. The other creatives all guarded their bits of the business like mother elephants.

I thought I’d made a breakthrough when I was given an assignment to write an ad. 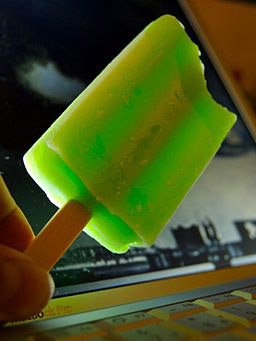 encouraging people to spend more money at ‘front-of-house’ (FOH, as it’s known); ie in the foyer. I believe it’s still the case that cinemas make a large proportion of their profit from FOH sales. It’s almost as though the movies themselves are the bait to lure unsuspecting customers into the foyer to shop for way-overpriced burgers, sweets, ice lollies and chocolate.

Anyway, in this instance, my task was to write an ad. for Wall’s Ice Cream. Which I did.

(Not sure why, but in the back of my mind as I write this, I hear Trump bellowing “We’re gonna build the wall!”).

Anyway, it turned out that my headline, which to this day I think was quite snappy, went down like a lead balloon. I think the old man though it was a bit too clever.

PUT YOUR LOLLY WHERE YOUR MOUTH IS

Pun on the word “lolly”? Didn’t go for it. It soon became clear that my career in Creative was going nowhere; I switched to the Media department.

It was all very political …