Labour: too many messages, too much haste, too little frequency

It’s undeniable that the media had succeeded in demonising Jeremy Corbyn in the minds of many voters, over a prolonged period, well before votes were counted in last week’s General Election. But in my view Labour created its own technical problems in the way it presented itself.

The party allowed the media to interpret its plans for the economy and society as an overnight revolution, rather than framing its aspirations within a timeframe which would be seen as more realistic. The reality of what Labour would actually have done – and when – is irrelevant: once in power, they could have turned on the after-burners or worked to a safer pace as necessary. But, persuaded by combined media forces, voters feared that the economy was about to be handed over to a Mad Max-type figure.

For instance, judging by some TV vox pops, many people accepted from the MSM that a Corbyn government would bring in a very damaging 4-day week in short order. That’s not what was said. It was a much longer-term aspiration, for working people across the whole economy. But that wasn’t made sufficiently clear, sufficiently often.

The media grabbed the commitment and shook the life out of it, turning it into a pledge to force workers to spend their afternoons watching daytime TV, while the NHS collapsed. The rationale wasn’t explained anywhere near often enough by the likes of John McDonnell. Just saying it once or twice was never going to do the job. If insufficient time was available to make it clear to the audience, it shouldn’t have been mentioned.

How do I know this? I worked for over forty years in planning the media side of (often major) advertising campaigns. Sophisticated advertisers know only too well the primacy of the three most critical components of a media campaign strategy: Impact, Coverage and Frequency. The impact a campaign message delivers depends on how it is conveyed in terms of noticeability – whether it’s attention-grabbing, memorable, etc.; the coverage achieved relates to how well-targeted the specific message is, to maximise exposure to as high a proportion of the target audience as possible; and the frequency of the campaign is a measure of the opportunities-to-see (OTS or OTH for opportunities-to-hear) the message.

In the case of an election campaign, impact isn’t a problem if the policies are clearly enunciated and presented with passion; high coverage is often a given, with media eager to gobble up and regurgitate every little tidbit; but effective frequency is much harder to achieve – and usually more important than the other two components.

That’s why Boris Johnson stuck to his monotonous “Get Brexit Done” line. His victory was a triumph of frequency over coverage. In my estimation, the parties were roughly even-Steven on achieving impact and coverage via broadcast and social media. Maybe Labour put a little too much faith in social media as a way of targeting their core audiences. Where possible, Johnson shunned really in-depth interviews which might divert attention away from or dilute his single-minded message. Right from the start of the “Leave” campaign with its infamous “£350m a week” message, Tory blatant untruths and weaknesses in police re-recruitment, replacement of nurses, broken promises on housing, etc. were batted away or avoided like the plague.

The opposite was the case with Labour. Their pot-shots at Tory failings often hit home; they were good on impact, with so many passionate speeches; but, beside the multi-choice Brexit stance, the sheer fragmentation and complexity of their alternative policy messaging was such that the target audience were given too much work to do. People didn’t have the time or inclination to decipher what exactly Labour was on about. Sometimes it’s best just to keep quiet. “For The Many, Not The Few” made a good start but quite soon became subsumed to daily unexplainable promised goodies. Waving the grey costings booklet about only complicated matters still further: the man on the Clapham (or Bassetlaw) omnibus was not going to write off for a copy.

The other day, Len McCluskey, General Secretary of Unite, writing in Huff Post, talked about ” … the incontinent rush of policies which appeared to offer everything to everyone immediately, and thereby strained voter credulity as well as obscuring the party’s sense of priorities”.

Much more focus: that’s what would have won the day on the policy front. Taking the four day week as an

example again, there simply wasn’t enough airspace to clarify it often enough as a longer-term aspiration. It was manna from heaven for the deliberate misinterpreters of Fleet Street. These add-ons were policies to be whispered in muted tones at Fabian Society meetings or in Facebook closed user groups. First, get into power – the great lesson taught by one Tony Blair.

A gradualist strategy wouldn’t exclude the possibility of bringing in the whole Corbyn shopping list, ultimately. But promising too much, too soon, is just a recipe for disaster. The ad. business is full of acronyms, one of its most memorable being K.I.S.S. – “Keep It Simple, Stupid”.

In the sense of keeping it simple, Labour Isn’t Working. Now where have I heard that before?

Oh no, not a written constitution, too …

That extraordinary cartoonist and illustrator, W. Heath Robinson (1872-1944), would have had the time of his life if ever he’d been commissioned to produce a visual representation of the UK’s unwritten constitution.

With the Queen at the top, the wobbly structure of governance in this sceptred isle passes down through so many layers of political and legal compartments that it defies normal modes of description, whether textual or visual. The current frenetic Brexit shenanigans have succeeded in nothing so much as to drag into the cold light of day the way each plank and pole of the existing constitutional scaffolding is liable to break loose and topple over at any moment. This is no doubt why some people are calling for a written version. But what a daft idea that is! The instability of the current system enables it to be adapted to any turn of political, judicial and social events. Thus its strength is in its unsteadiness. It changes with the times …

They mean well. They assume that a written-down constitution would represent an unambiguous code which could be referred to in order to provide irrefutable guidance and resolve all manner of disputes, thus arriving at the truth of the matter. The problem is that truth is a slippery beast and extremely difficult to snare. And, in any “case”, the very ambiguities of the unwritten constitution are what make it workable.

But just supposing … where would you start in making a written constitution out of today’s bits and pieces? Let’s remind ourselves of some of the things that would need to be incorporated into such a document …

No doubt one of the first paragraphs would refer to the Monarch and her family, though I daresay the phrase “rubber stamp” would probably not be used, apt though it might be. Parliament‘s role as legislature (law makers) would also get an early look-in, though I doubt very much if it would be referred to as a “talking shop”. Then, that chunk of parliament that is empowered to actually do things, the Government (or “executive”, in posher parlance) would obviously ensure that it got a priority position. 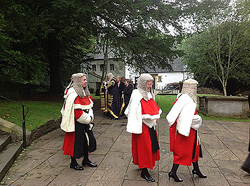 Vying for another top slot would be the be-wigged Judiciary, though no doubt its lengthy paragraph would be replete with references to “heretofore mentioned”s, “notwithstanding”s and “prima facie“s.

And then, lower down, making due allowance for their inferior status, would be the People (that’s us lot).

But, to use an image from the world of cookery, for the purpose of writing a constitution these groups are no more than the mixing bowls. A whole supermarket shelf full of ingredients would need to be stirred together to produce the final product. The process would require the skills of a constitutional Mary Berry, who would oversee not so much a Bake Off as a Boil Down.

On the kitchen table would be many centuries’ worth of statutes (laws passed by parliament), case law (created by the judges in their judgments on both civil and criminal law, wherein they make reference both to statute and previous judgments), common law (which grows out of case law, custom, precedent, parliamentary procedures and of which there are innumerable different flavours …), conventions (ways in which things have been done in similar situations previously), interpretations, justiciability, human rights, the role of the Speaker, manifestos, etc., etc., etc.

This is not to mention the other smaller mixing bowls, such as the House of Lords, the devolved parliaments in Scotland, Wales and Northern Ireland, the treaties which the UK has already and may in the future conclude with the EU and other countries and the whole business of the conflict of laws.

But let’s make the rather large assumption that it’s been possible to précis all of the above into a two or three page summary. Let’s imagine that BBC interviewers in a typical high street would find general approval for the written constitution amongst their vox pop interviewees (some of whom might well declare that they just want the powers-that-be to “get on with it”).

Even then, there is the over-arching business of morality. Oh yes, there really are more things in heaven and earth than are dreamt of in law and politics. At the apex of this whole panoply of laws and conventions is the notion of good and bad, whether derived from the intricacies of religion and embodied in the person of the monarch or simply from personal conviction.

Thus we find that nothing is set in stone. Morality can trump the whole caboodle. Even the result of a national referendum on an (apparently) specific question is wobbly, as we’ve seen over the past three years – and as indeed was confirmed in terms by Attorney General Geoffrey Cox in answer to the following question from a backbencher just a few days ago (25th September, 2019, Prorogation Legal Advice Urgent Question).

And what use would a written constitution be if it served only to add yet another layer of wobbliness to the current unwritten superstructures? One has only to consider the divisiveness and controversies created by the Second Amendment of the US constitution. (The US document runs to four sheets, including twenty-seven amendments).

Well, maybe one day some Artificial Intelligence-powered algorithm will be able to tie together the innumerable planks and poles in a way that can be summarised in a brief written UK constitution. But meanwhile we’re stuck with our current Heath Robinson-esque, typically British solution, for better or worse.

Bake Off, fair use