“Season of mists and mellow fruitfulness” – John Keats, To Autumn.

The onset of Autumn has brought with it occasional mists and plenty of fruitfulness. But in more abundance this year have come high winds and lashing rain, intermingled with some extended and pleasant spells of sun and warmth. The change of seasons has brought very changeable weather.

Our Rhus Typhina, or Staghorn Sumac, has put on a particularly splendid display of autumn colour, first with its fruits and then in early October with the reds and oranges of its leaves.

The Cosmos have hung on right to the end of October, their vivid mauves, violets and pinks defying the first frost to appear.

A similar tone is displayed by the Sedum, its rubbery leaves affording it protection from harsh conditions.

Even more striking have been the low-lying but gleaming Gazania Tiger Stripes flowers, seemingly indestructible by any storms.

As for fruitfulness, we’ve had an amazing crop of both eating and cooking apples; but our sweetcorn and Cylindra beetroot have been so-so.

If our planned house move goes ahead, this will be our last season in this garden. It’s been a very interesting challenge and we’ve learned a great deal.

We’re reaching the end of our long journey to prepare our inherited property for sale. Upgrading the garden has been a big part of the process. And we decided that the small patio in front of the conservatory really did need to be smartened up.

There were various issues with it. The large grey slabs looked a bit old-fashioned, given the fancy sizes, colours and textures that are available nowadays. The grouting had almost completely disappeared. And the whole area seemed to have a depression in the middle, as though some kind of collapse had taken place. Overall, it looked scruffy and didn’t really contribute positively to the look of the garden. 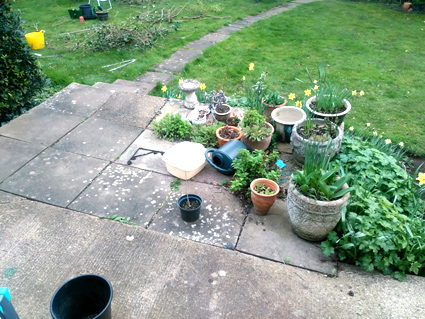 On reflection, though, we decided to work with the slabs that were there. Not only would there be a cost-saving but actually we didn’t really want to focus attention on the slabs and creating a jigsaw of different shapes and colours would be too time-consuming.

I must confess my one previous attempt at refurbishing a patio couldn’t really be classified as a triumph. That was before the days of YouTube and the myriad helpful videos that seem to be available for any DIY task from roofing to drainage and all stops in between. Nonetheless I raised the first slab with some trepidation …

It was immediately apparent that there was going to be more to this task than simply making a bed of damp cement mixture for each slab and lining it up on top. The supporting brickwork was crumbling badly.

I must confess, though, that I was rather intrigued by the various flora and fauna that had made the patio their home. There were numerous species of insects, including ants, earwigs, snails and worms. Whoever had built the patio previously seemed to have used mostly sand; though there was also a significant amount of something akin to garden compost. My theory is that this was soil ferried in by the residents over the last thirty or so years. It was easy to see why the surface of the patio had become uneven, with ivy and other roots stretching their tentacles beneath, around and between the slabs.

So I got to work doing the necessary repairs to the sub-structure for each slab, then using a proprietary mixture to create the necessary bed on which the slab would lie.

I used Hanson Sand Cement Mortar and Blue Circle Slablayer. Both worked well, though I found that I needed to treat each slab as a project in its own right, as it were, because the slope of the sub-structure, the condition of brickwork (where it was a factor) and (even) the size of each slab varied. Yes, some of the slabs were marginally bigger (length/breadth) and deeper than others – a complicating factor which created a knotty problem at the end of the process.

Then there was the question of what to with all that soil/sand/compost mixture that had been home to the sub-slab denizens. In fact as time went on I found myself using some of it to give bulk to the Slablayer beds. The instructions for the Slablayer product indicate that one should just make the bed at an appropriate height and scatter water on top. I assumed that this meant that the water would seep through and solidify the bed. But it didn’t … which it turned out wasn’t a problem. The slabs made a firm bond with the wetted top layer; but the unwetted level beneath wouldn’t move about. So I took the opportunity to use the old soil/compost as a means of filling up the middle of the bed, with Slablayer all around it. Worked a treat and saved money too! After adjusting the height and alignment of each slab (a few words to describe what in fact could be a very tricky, time-consuming process sometimes), I sealed the under edges with cement.

Always remember when working with cement in this fashion to spray the area lightly with water before pressing the cement against it. Getting the right consistency for the cement is an art in itself. Too dry and it won’t adhere properly but falls apart; too wet, and it runs away like slurry.

I didn’t use many tools: a couple of trowels, a rubber hammer (for safety when bashing the edges of the extremely heavy slabs, to manipulate them into the exact required position), a quite chunky old screwdriver, for levering slabs which wouldn’t budge, a piece of wood to use to check for consistent gaps and a spray bottle (in my case Dettol) to wet the material as required. (Later I also used a special tool for pressing down the grout in between the slabs). And, of course, vital but not shown in the picture, a spirit level!

I seemed to manage an average of a couple of slabs a day. They were so heavy and I didn’t want to do more harm to my bad back than was absolutely necessary! 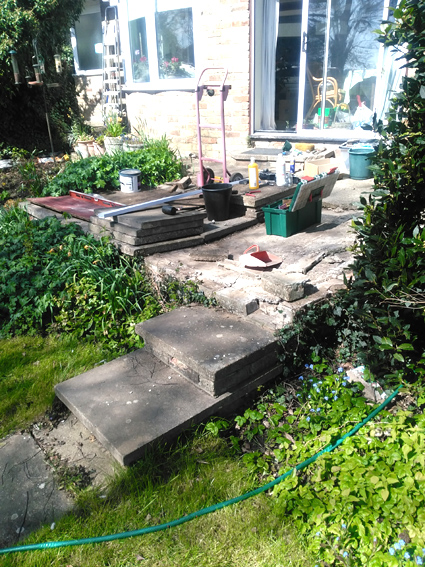 Time moved on, bad weather came and went, and eventually all the slabs were in place … 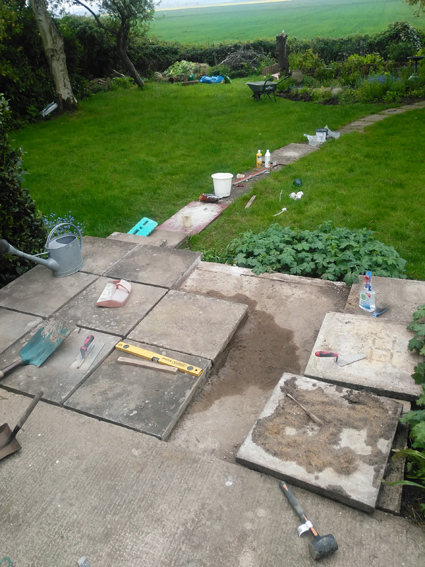 Well, nearly all. Right at the end I discovered that the final slab was too big to fit into the space available. Remember I said that they were different sizes? The concrete path was in the way – so I had the difficult task of chiselling quite a large chunk out of a corner of the path to accommodate the last slab. 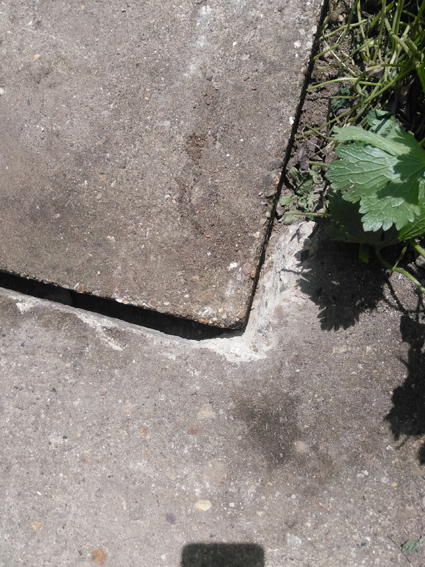 And so arrived the last chapter – grouting.

For this I used Sika FastFix, an all weather jointing compound. It seemed to do the trick. I followed instructions and wetted the area where I was about to use it; then emptied an appropriate amount along the edge of the gap; then used a hard yard brush to sweep it into all the gaps. It’s not cheap, and I did need to order a second pack. But I’m very happy with the outcome and have used some of the excess to fill gaps in some existing pathways.

I used the long, thin, trowel to push the FastFix down into the gaps to make a firm bond. One or two of the slabs were slightly rocky before I added the grout; but after it hardens (as I’d hoped) it adds complete stability to the structure.

So the next step was just to leave the rebuilt patio to settle and the materials to harden through bursts of rain and sun. Finally, I was able to give the whole thing a good sweep, to remove dust and grime.

It only remained to go out and buy some plants and the obligatory conifer and all was finished. I’m pretty pleased with the result – maybe this was how the original patio looked all those years ago! 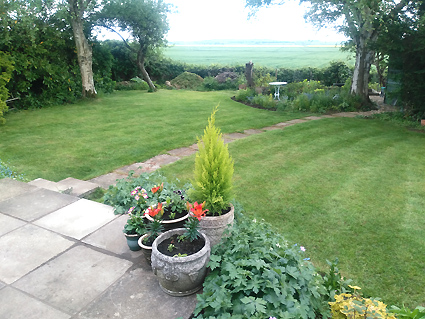