Bats … and the Monster of the Fens

“No better reasons for monarchy could have been found than were forced upon all minds by the events of Stephen’s reign”, Winston S. Churchill, A History of the English-Speaking Peoples, Vol. I.

About a hundred and fifty yards from the end of our driveway in Hollow Lane, Ramsey, Cambridgeshire, is an unprepossessing piece of rough land of maybe a few acres, including a central mound, a flat area to the front and a surrounding water-filled depression. Booths Hill, previously the site of a castle, is now a miniature wildlife sanctuary, home to a protected colony of bats and, according to those who have seen them, various other small animals. It seems a fairly unremarkable, peaceful place, especially on a still, cool summer’s evening, as the bats take wing, rising and swooping in their hunt for insects; unremarkable, except that a tourist information board draws attention to the historical significance of the site … 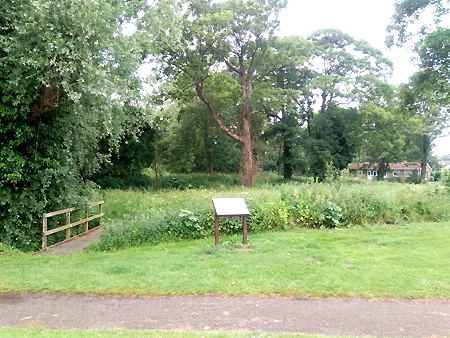 King Henry I died on December 1st, 1135. (His doctor had given him strict instructions not to eat lampreys; but he ate them nonetheless, and proved the wisdom of his physician’s advice in the worst possible way). His death set in motion a sometimes complex and ultimately very bloody and brutal era in English history. Whilst in his final days, Henry had done everything

possible to try to persuade the most powerful barons that his daughter Matilda (also known as Maud) should succeed him as sovereign; but her brother Stephen (right) and his supporters were able to find what appeared to be equally valid reasons why he should become king. The king’s demise unleashed a civil war between the supporters of Maud, who “… had the nature of man in the frame of a woman”* and Stephen, “… a mild man and soft and good”**, in a period of conflict and extreme violence which was so lawless, disastrous and chaotic that it came to be known as The Anarchy.

Neither of the two siblings was an attractive choice as potential monarch, and their power bases waxed and waned. There was a constant flux of loyalties between the two, amongst barons who in reality were only concerned with what they could get for themselves. In a number of ways East Anglia at this time was the most important region in England. The Catholic religion, with its cathedrals, abbeys and parish churches, was growing in strength financially, and in terms of worshippers and international reputation, faster than anywhere else; towns were increasing in size; local trade was flourishing; many travellers passed through the area on their way to the north; but most notably it was home to some particularly powerful and oft-times ruthless barons. A number of these earls were quite happy to see the breakdown of law and order across this attractive part of the country, and took full advantage. Simon Sharma uses a quote from The Anglo-Saxon Chronicle to vividly describe this tempus werre, or “time of war”:

“Every great man built himself castles and held them against the king … they sorely burdened the unhappy people of the country with forced labour and when the castles were built, they filled them with devils and wicked men. … By night and by day they seized those whom they believed had any wealth to get their gold and silver, they put them in prison and tortured them … they hung them up by their feet and smoked them with foul smoke … when the wretched people had no more to give, they plundered and burned all the villages … the wretched people perished with hunger … never did a country endure greater misery” ***

One of the most notorious of the barons was Geoffrey de Mandeville. Earl Geoffrey began by supporting Stephen, but when Stephen was sent to the Tower after the Battle of Lincoln he switched allegiances to Matilda, only to switch back again when Stephen was released in December 1141 and soon became king. Nonetheless the Earl was arrested by the king’s men and threatened with execution in 1143, so gave up to Stephen his custody of the Tower of London and various castles – but on release determined to rebel. He hot-footed it to Fenland, establishing his main base on the firm terrain of the Isle of Ely but also taking control of a little town called Ramsey.

de Mandeville now began to use his financial power and fearsome reputation to rain terror on the people of Ramsey and surrounding Fenland districts right across Cambridgeshire, whose population of poor peasants and serfs, no longer protected by a strong king, were overawed by this “Monster of the Fens” and lived in fear of a visit from his vicious, pillaging troops. He threw out all the monks from the nearby abbey and confiscated much of its wealth. Roads across the marshy fens were very poor, so the outlaw de Mandeville had the area at his mercy.

Although details are subject to some debate, it’s believed that he built a small motte-and-bailey castle to the south of Ramsey Abbey, namely Booths Hill, where his troops were billeted between 1141 and 1144.

In the motte-and-bailey system, which was used right across Europe (see illustration left, from the Bayeux Tapestry****), excavations from a surrounding ditch are piled up to produce a hill (or motte), at the top of which a castle made of timber (as in the case of earlier structures) or stone (as was the case with later buildings) is constructed. A flatter area below the motte was created, and this was the bailey, where a number of buildings serving the castle might be found. Often there was a bridge-type structure rising either from the bailey or from the other side of the ditch. At Booths Hill, the water-filled ditch can still be seen.

Geoffrey de Mandeville met his end in 1144. The king had built, or was building, a number of small castles in Cambridgeshire, aimed at preventing the rebellious de Mandeville from cutting links between London and the north. One such fortress, under construction at the time, was Burwell Castle, to which de Mandeville lay seige. The king’s men refused to give in and in the ensuing battle de Mandeville received a mortal wound from a crossbow.

The complex, bloody and brutal civil war now known as The Anarchy lasted from 1135 to 1153.

Much of the remaining history of Booths Hill is shrouded in mystery, but it is known that the hill was adapted to serve as an ice house for the family who owned the nearby Abbey House. Ice houses were a popular means of storing ice during the summer, providing the equivalent of a giant refrigerator and a source of cold water. The Benedictine monastery, Ramsey Abbey, which so dominated the early part of Ramsey’s growth, was one of the five hundred or so religious buildings right across the country which were destroyed, their assets sold off, at the hands of Henry VIII, being dismantled during the Dissolution in 1539. Some of the masonry from the abbey was used by the Cromwells to construct Abbey House in around 1558. It became the permanent home of Sir Oliver Cromwell in 1627. The building survives today as Ramsey Abbey Sixth Form College – see photograph below – where I was pleased to work as a part-time teacher of English Literature for a time. 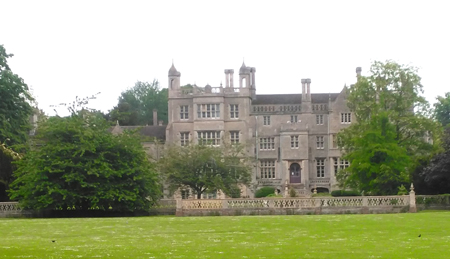 Booths Hill is now a wildlife sanctuary, the ice house having undergone some restoration work. As I stroll past it, I appreciate it as a natural haven of peace and tranquillity – so very different from the terrifying time when it was first built.

One of the worrying consequences of Donald Trump’s Great Wall will be its effect on wildlife. A recent piece in Scientific American mentioned that wolves, ocelots and even jaguars have been seen along the existing border walls. “Environmental groups say that migration corridors are crucial for the recovery and survival of wildlife along the border”, declares the article.

The piece also mentions the fact that architects have referred to the wall as a “pharaonic project”. It’s as though Trump, like the Pharaohs and their pyramids, sees it as his right to build a vast structure to memorialise his reign as supreme leader of the USA; indeed, it’s almost as though he feels he now owns the USA.

And it’s only natural to want to protect one’s property, of course. Somehow I doubt whether Mr. Trump is too concerned about the ramifications of his proposed barrier for border wildlife, given his apparent lack of concern about environmental issues generally.

But, funnily enough, when I read the Scientific American article my mind drifted back to a school trip … and a day when I learned that some people need to keep animals out of their territory.

Every summer, two or three coachloads of boys and girls aged around ten would set off from our school to visit various places of historic or cultural interest – museums, wildlife parks, a picturesque place at the seaside. I remember a wonderful afternoon’s rock-pooling in Aberavon, for instance – that kind of thing. Isn’t rock pooling fun, by the way? It’s enjoyed all over the world, as here by some young people in New Zealand. 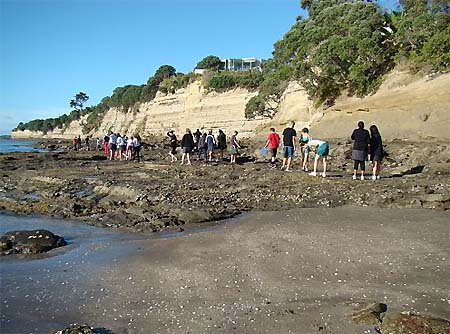 On this particular occasion, we visited a large and quite ancient stately home.

Our guide was very knowledgeable but regrettably her pronounced stutter was the cause of a great deal of giggling by our young party, much to our teacher’s embarrassment and annoyance. There was a very fine collection of p-p-p-paintings, for instance. And I remember that she showed us the underground i-i-i-ice house, which, intriguingly, was where food was kept fresh through the winter.

Owners of stately homes in England and (as in this case) Wales have used a variety of methods to keep out intruders. But not all intruders are of the human variety. The incursion of animals, especially deer and sheep, can be a big problem, apparently, which is why the land closest to the house is often surrounded by a long, grassy, wall-backed trench, like this one in Farnley Park, Leeds.

Anyway, as time passed the mirth continued to spread like waves across the gathering, growing with every verbal hiatus, as the poor lady’s face became increasingly flushed and our teacher almost apoplectic with rage. We were a cruel bunch! 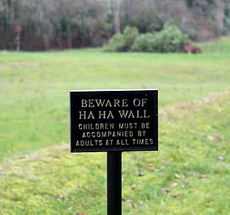 But things were about to come to a hilarious climax, as we arranged ourselves along the trench that surrounded the house.

“And this”, announced our guide, “is the house’s h-h-h-h-ha-ha-h-h-ha-ha-ha!” – at which point everyone fell about in complete hysterics.

I’m pleased to report that both our long-suffering guide and the teacher shared in the hilarity, in a small incident that has stayed in my memory ever since.