Deadly danger in the garden! I watched as an amazing crop of mushrooms and toadstools sprang up over the past couple of months. But I was shocked when I identified this specimen …

Although I’m a complete novice in the field of fungi, I remembered seeing this one illustrated as being deadly. And I believe this video on the wildfooduk.com website (a really fascinating, well-produced site, by the way) confirms my suspicion.

October can be a strange month in the garden. Some plants continue to grow full pelt and produce fruit or flowers; others quickly lose their leaves, wither and die, succumbing to the first frost; and then there are the fungi …

Fungi seem to have appeared every year, in all our previous gardens too, often arranged in a whole or part circle: both annual and annular, as it were. But this year has been different: the more I looked, the more I discovered so many individual plants, groups, pairs, rings – and so many different types.

Well okay, they’re not plants. In fact, they’re neither vegetable nor animal, the experts tell us. They form a completely different Kingdom. So what should we say they are? Planimals? Vegetals? Coincidentally, scrolling through our TV’s programme guide, I just happened to come across a discussion show on Al Jazeira, which featured a revealing interview with mycologist Paul Stamets. He confirmed that many fungi do indeed appear suddenly, in “cellular explosions”. Incidentally, Stamets is a cast member in a 2019 movie called Fantastic Fungi.

He believes that fungi are extremely under-exploited. With their largely-untapped uses in the fields of pharmacology, agriculture and environmental improvement, research into fungi should be funded as much as the computer industry, he suggests. Fungi produce water, hydrating the environment and sweating out enzymes, he says, and spores of mushrooms often become nuclei for raindrops, potentially a game-changing benefit in arid areas of the planet.

I think the unseasonably warm and moist atmosphere during this period must have been an important factor in prompting the appearance of so many. In fact, I didn’t realise quite how many were on display until I did a kind of “audit”. Searching in the grass, under trees, along the sides of concrete paths, in undergrowth, on wood piles and hidden away in crowded borders, I discovered some specimens I’d never have known were there. It all started with this lot …

I can’t say with any certainty what type of mushroom (toadstool?) these are.

Looking at my copy of The Observer’s Book of Mushrooms and Toadstools, I’m in awe of experts on fungi – mycologists – who can distinguish between the vast array of individual fungi types. It turns out that there are four main divisions in the world of fungi: Chytridiomycota (chytrids), Zygomycota (bread molds), Ascomycota (yeasts and sac fungi) and Basidiomycota (club fungi). The divisions are based on the way in which different fungi reproduce sexually.

But of course in the large majority of cases I haven’t a clue as to the names of the individual types that I came across. Having said that, realising that there are so many examples in and on our modest garden does make me want to find out more.

Ah yes, the gills. Also known as lamella, apparently, and the place where spores are formed and ejected. I wondered whether mushrooms and toadstools all had gills. Well, just hold on. I’ve searched in vain for information on the distinction between mushrooms and toadstools and it turns out there isn’t one. The Observer’s Book says: “The name commonly used for the cap fungi, other than mushrooms, is toadstools”. Elsewhere I read that they’re non-scientific terms, most often used to distinguish edible from non-edible fungi, and shorthand names for differentiating a fungus with a more ‘conventional’ shape (stalk and cap) – mushroom – from one with some other shape (toadstool). Though not always. Okay?

Anyway, back to the audit. Here are some more pics of the fungi I found.

Did you know, by the way, that for sheer size the largest living land organism is a honey fungus that makes a blue whale look like a mouse in comparison. Back to the audit …

Fungal spores are so light they are easily blown around by even the lightest of winds. The thought occurred to me that they might well fly so high that they could reach the exosphere and be conveyed to other planets – or even to other solar systems – by the effects of gravity and solar winds. Well, from what I’ve read of the weighty debate about this topic, it does seem unlikely. But the argument in favour of panspermia, in opposition to abiogenesis, is one that seems likely to run for many years to come.

After a few weeks, most were gone, cringing and shrinking into the cold of the night air. By the time of the first November frost, they’d vanished.

Vanished but not died: what I’d seen was each fungus’s “fruiting body”. Below the surface, the mycelium lives on, often lending assistance to other plants, as I mentioned in my blog about planting bare root roses. Fungi act as an internet of the soil, allowing plants to communicate with each other. I wonder if we’ll ever be able to join in their conversations? It seems that mushrooms have a great deal to offer us.

And, of course, they do provide a key ingredient in a mushroom omelette; though make sure you choose the right variety …

Is over-emphasis on high temperature creating a headache for Covid testing labs?

As we all know, a high temperature is one of the most important indicators that someone is infected with Coronavirus. Except that it isn’t.

We all think it is, because it’s been widely publicised through government press conferences, ministerial interviews and advertising. It’s also the first symptom mentioned on the page of symptoms listed on the NHS website about Covid-19 symptoms.

We often see news reports featuring temperature measuring devices being used at work places, public events, educational establishments and airports. So it’s hardly surprising that many people who develop a high temperature will immediately think “Must get tested”. But, as the NHS also points out on its website, “A fever is your body’s natural response to many common illnesses”.

The corollary to this is that it’s unsurprising that the test analysis system has been overwhelmed recently. I suggest that this is caused not by inconsiderate people in a panic but by over-simplistic, ill-targeted messaging …

A massive piece of ongoing research by health science company ZOE, endorsed by the Welsh Government, NHS Wales, the Scottish Government and NHS Scotland, suggests that fever or high temperature – on its own – is actually a quite unreliable early indicator that someone has the virus. Fever is a symptom that can be an important indicator in combination with others; but even then there are other symptom combinations which are much more reliable.

The COVID-19 Symptom Study is an app-based survey which, according to the company, is “the largest public science project of its kind anywhere in the world”. The app has been downloaded by over 4.2 million participants, who use it to report regularly on their health, with data being analysed in collaboration with researchers from King’s College London. The app is available from the App Store and Google Play.

Fever, when it occurs, is certainly one of the more important factors to look out for amongst under 18s and over 65s. But for the huge 18 to 65 year old demographic, representing about 40% of the population, it’s quite a long way down the list of priorities. 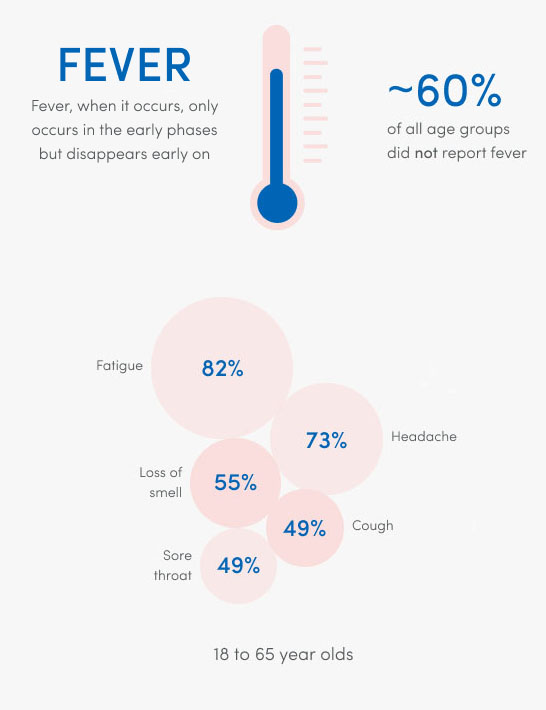 As we know, this disease is complex and its victims experience a wide range of effects, from no symptoms at all to death; it can clear up after ten days or leave people with a varied list of long-term after-effects (‘Long Covid’); and now it’s clear that it affects different age groups in different ways. Even then, it’s inconsistent: its effects on individuals may not be typical for their age group.

The simple messages being issued by the government are well-meaning. As someone who planned major advertising campaigns for over forty years until I

retired recently, I’m only too aware of the importance of that well-used marketing mnemonic K.I.S.S. – “Keep It Simple, Stupid”. (I worked on a number of sometimes complex and multi-targeted international ad. campaigns aimed at recruiting volunteers for clinical trials – see this article I wrote on LinkedIn about this).

But I do believe that more people should be told about this kind of research. There are many who don’t have the inclination to dig deeper into what we do know about the virus. For them, the simplistic mottoes put out by the government have worked. But it’s essential that these messages are expanded to build more knowledge about the latest findings. It’s true that hospitals have not been overwhelmed – good communications achieved that objective. It’s now time to come to the aid of the testing labs.

People understand the rules of football; they can navigate the web and make online purchases; they can plan holidays abroad. It’s now time for them to learn more about the finer points of Covid-19. A more detailed and carefully thought-through communication programme is urgently required, targeted at the different demographics. Greater awareness and understanding is key to changing attitudes and actions. Generalising and over-simplification can be counter-productive.

So in my view, we should be moving swiftly into a much more targeted Phase II of messaging, in the same way that we are refining our targeting of restrictions in terms of movement, household meetings and lockdown.

I have cut and pasted unaltered extracts from the COVID-19 Symptom Study to fit into my blog format. The website for the report can be found here, and as mentioned the app can be downloaded from the App Store and Google Play.