But if you mouth it …

Needless to say, you don’t see William Shakespeare‘s name in the credits at the end of an episode of one of the wonderful ‘box set’ TV dramas. They roll along, listing countless technical positions, many of which are a complete mystery to me: “B-Dolly Grip, Loop Group, Foley Walker” – it’s a different language; difficult to work out what it all means.

Unfortunately, the same can too often be said about the dialogue, whether because of insufficient vocal projection by the actor or sloppy recording by the Sound Mixer (or Re-Recording Mixer, or, maybe, the Supervising Sound Editor). Being able to hear and understand dialogue is a fairly basic necessity when trying to follow the twists and turns of the plot in these dramas. The same too often applies to other TV movies and frequently to movies shown in the cinema. The work of the author and/or the screenplay writer is often undermined either by poor sound quality or by insufficient volume.

At least on TV there’s usually the alternative of switching on subtitles. 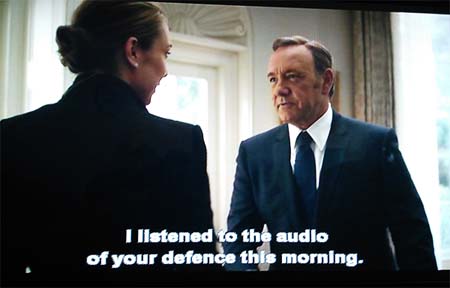 Shakespeare had no such luxury, of course. Actors and actresses had to declaim their lines, punching out the words whatever the dramatic, or comic, context. In Twelfth Night, for instance, in the famous scene where the vain Malvolio is tricked into believing a note he finds on a garden path is from his mistress, Olivia, the head of the household, it’s obviously important that the tricksters keep quiet as they observe the victim of their cruel jape.

Maria places the letter, which seems to set out Olivia’s fulsome admiration for Malvolio, and then joins Sir Toby, Sir Andrew and Fabian, hiding in the box-tree. 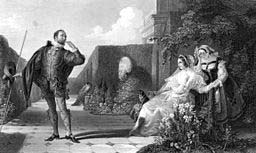 Malvolio is not their favourite person – they take great (and hilarious) delight in mocking him, as he finds, opens and reads the contents of the letter.

Now in a box-set version of this scene, the conspirators would no doubt be shown whispering their lines to each other. My guess is that the words would be barely perceptible, in an effort to maintain the illusion of reality. Subtitles are of great help in such a situation.

But Shakespeare didn’t need such a device. The theatrical convention was that whispers could be proclaimed with almost as much force as ordinary spoken speech. Indeed, the Bard laid down, albeit indirectly (in a plain text speech in Act III, Sc. 2 of Hamlet), clear guidelines for how actors should render the lines he had written. The key consideration was that the audience should hear the lines, whatever the nature of the scene or the venue: they should be said in a ‘temperate’ fashion, neither too softly, nor, indeed, too loud. Simply ‘mouthing’ the words was unacceptable. Shakespeare says that if actors are going to say the lines too quietly, it’s as bad as shouting them at the tops of their voices, like the town crier:

Speak the speech, I pray you, as I pronounced it to
you, trippingly on the tongue: but if you mouth it,
as many of your players do, I had as lief the
town-crier spoke my lines. Nor do not saw the air
too much with your hand, thus, but use all gently;
for in the very torrent, tempest, and, as I may say,
the whirlwind of passion, you must acquire and beget
a temperance that may give it smoothness. O, it
offends me to the soul to hear a robustious
periwig-pated fellow tear a passion to tatters, to
very rags, to split the ears of the groundlings, who
for the most part are capable of nothing but
inexplicable dumbshows and noise: I would have such
a fellow whipped for o’erdoing Termagant; it
out-herods Herod: pray you, avoid it.

Kevin Spacey‘s amusing asides in the excellent House of Cards serve to underline the significance of what has just been heard in the episode. Asides are a popular tool used by Shakespeare, and I suppose are the nearest he gets to using subtitles.

One other device in House of Cards that seems to be of more significance for the future of drama is its incorporation of on-screen rendering of text messages. Now, texting is something that not even Shakespeare could have seen coming …