Well, as I made clear in my last gardening diary, my focus for the last twelve months has been mainly on the back garden, and specifically on what eventually – after a long, hard, slog – became our vegetable patch.

But more of that later …

The show had to go on at front-of-house. And there are few flowers which can offer a quicker and more showy solution to the problem of adding lots of colour rapidly to a flower bed than the humble petunia.

We didn’t have much of a garden when I was a kid, but I had heard of petunias, on the radio. I had no idea what they looked like, and I wouldn’t have recognised one if I tripped over it. But a rather haunting (in more ways than one) song, played by Uncle Mac on a BBC children’s radio show, made me very familiar with the existence of the genus.

I sowed and raised about a hundred petunias in early Spring and planted them mostly around the front border. As you can see, they certainly weren’t lonely.

We’re planning to fill up the border with perennials next year, so most of the petunias won’t be around much longer. They’re generally regarded as annuals, I think, but they often seem to overwinter well. So we may retain some hardy specimens.

We’re very lucky to have inherited (along with the house) a fine collection of established shrub roses. Judicious pruning, frequent dead-heading and feeding seems to keep them looking pretty good.

We’re in two minds about Goldenrod (Solidago). It can be a bit of a thug, self-seeding everywhere and spreading into a drift where it’s not welcome. To that extent it can be very effective in a large bed; but here we have to work to keep it in check. Must admit, though, it certainly adds a splash.

We also have a number of established primroses of various shades. Amongst our collection are quite a few which didn’t flower. They clearly need splitting up and re-planting in fresh soil.

We chanced our arm with the purchase of 72 perennials of various kinds. Thomson & Morgan‘s offer was ridiculously cheap and to add to our satisfaction we found that many of the ‘plugs’ contained more than one plant. In fact, believe it or not, quite a few turned out to contain as many as five! When they arrived, they were extremely diminutive, of course …

… but once potted-on – four to a pot – they soon grew away and are currently looking almost ready to be planted out or potted-on again (we’re giving those options some thought).

There are Achilleas, Foxgloves, Aquilegias, Delphiniums, Echinacia, Gaillardias, Leucanthemums and more: so, all quite exciting. We’ve got far more than enough to crowd into the front border, so there’ll be plenty to help fill in gaps in borders at the back, including this new border which I’m in the process of “bringing online”.

In addition, we’ve divided one existing Foxglove to produce around five plants. It will be interesting to see how these get on. 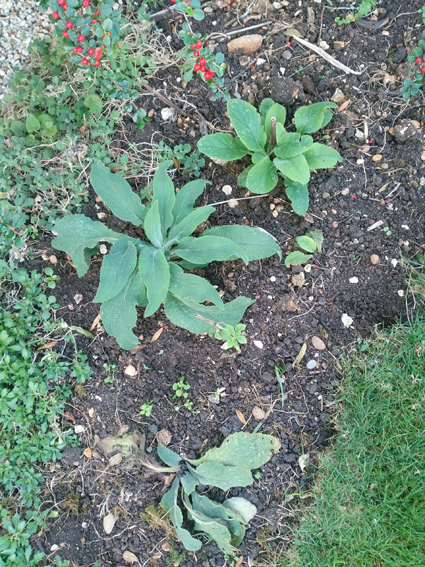 The honeysuckle flowers mostly died away some time ago. But here’s one that’s just appeared. Lovely, I suggest.

The ‘wild’ rose that I mentioned in my last gardening piece continues to produce the odd bloom, like this one, currently in flower. 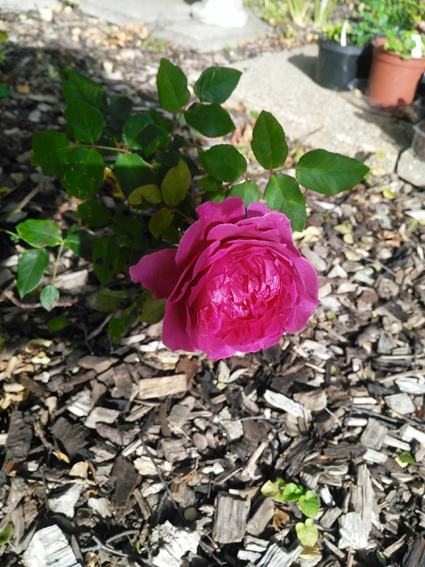 This is Cyclamen Hederifolium, in dry shade amongst the ivy leaves and a fallen twig from one of our birch trees. I love the way the flower stems unwind like tight clock springs. Notice that its leaves are indeed just like ivy (Hedera). 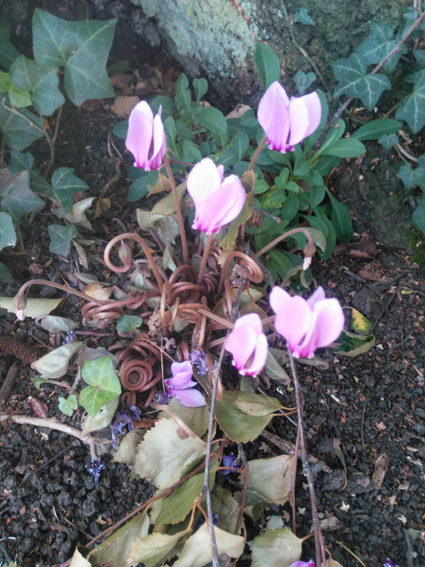 Our vegetable patch (below) was cleared and completed in the Spring – and it’s been quite productive in its first year. The idea all along was to turn the property into a more attractive package, ahead of putting it on the market next year. 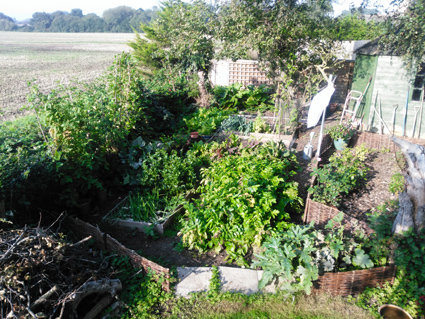 I tried growing cucumbers up a spare piece of rigid plastic netting. The variety was Bella. I made the mistake of starting them off too early and they died back after successful germination. A second sowing in late April was successful, but the growing/fruiting period was somewhat curtailed, so we didn’t get many fruits. However, what we did get were crisp, firm and very tasty, so I’ll certainly grow them again. 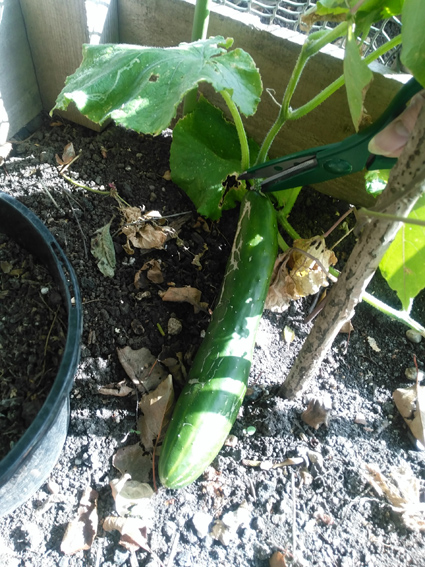 I’ve grown cucumbers in the past, both indoors and outdoors. A few years ago, I grew one of the most popular varieties, Telegraph, on an outdoor potting bench. You’ll find my comments in my June/July 2017 gardening blog, but to save you the trouble, here’s what I wrote: ” … getting a fantastic crop, just grown in a growbag in a sunny spot on the potting table”. So growing outdoors can be a winning strategy.

However, back in August 2015, growing the variety Marketmore in my (then) greenhouse, I commented ” … all a bit puny”. The cucumbers were short, fat and rather prickly, and the taste wasn’t up to much either, as I recall. So, if growing cucumbers under glass, be careful to choose a good quality variety.

Right now, I’m waiting for the remaining tomatoes to turn red (in the case of Gardener’s Delight) and yellow (in the case of Golden Sunrise). As daylight hours shorten and the sun is lower in the sky, it’s wise to take off most of the leaves, so that exposure of the fruits to the sun is maximised. 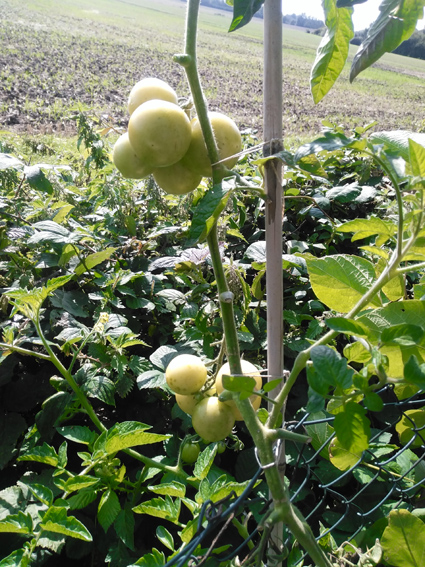 Tomato production didn’t proceed evenly and there was a week where we needed to buy some from the supermarket. No idea what the variety was, but they were big and juicy. Lynn had the very bright idea of saving and drying some seeds from them, so we’ll try growing these next year, hoping that they’re fertile (which isn’t always the case with hybrid varieties).

Our spinach crop is doing particularly well. If there’s a shortage of fresh veg. next year because of the wonderful Brexit fiasco, our everlasting spinach, along with seven or eight other winter crops, should keep us well-supplied.

I’ve sown a follow-up batch of Swiss chard. In the past, I’ve tended to pull it up at the end of summer, but I read recently (news to me) that it can be winter-hardy, so I’ll be testing that theory.

My leeks are doing okay. As a Welshman, my main objective is to have at least one available for St David’s Day, next March 1st! 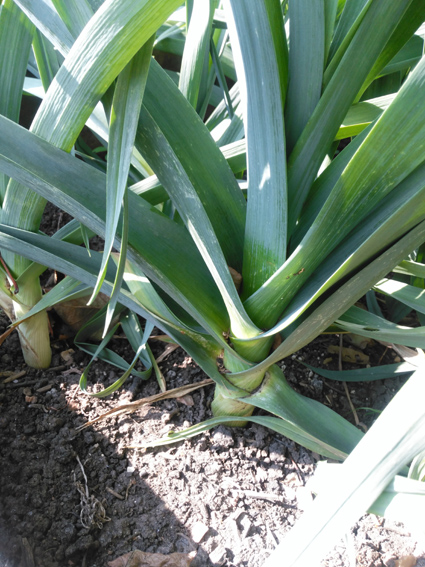 Sprouting Broccoli is one of my favourite garden vegetables. Unfortunately, my taste is shared by the Cabbage White butterfly, which has mounted daylight raids on all my young plants on a fairly continuous basis, leaving their tiny little white eggs on the undersides of almost every leaf. These seem to turn into ravenous green caterpillars in no time at all, so I’ve had a constant battle just to keep my plants from becoming skeletons. I think I’ve just about managed it – even so, they do look a bit the worse for wear. But previous experience tells me that once they get to this size, they tend to be able to grow on and survive. I’m looking forward to snapping off the first shoots around next April. Well worth the wait.

Don’t pull (= pick) rhubarb in its first year, say all the gardening books and TV experts. What nonsense! 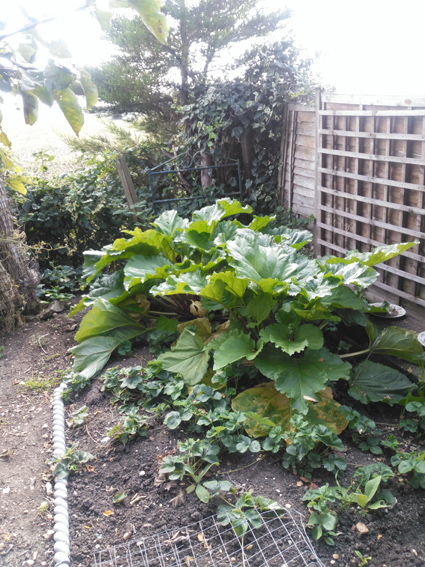 Overall, we seem to have got the balance just about right in terms of numbers of plants. Here’s a pic. of a typical morning’s pickings …

This hawkmoth caterpillar was a spectacular visitor. They dwell in ash trees, apparently. So said the book, but when I placed it on a branch of our ash tree at the front, it fell off. So I concluded that, as is often the case with Mother Nature, I’d have done far better just to leave it alone …

Finally, I’d just like to recommend the nation’s gardeners to invest in a windsock. (Actually it started off as a bird scarer, but the birds didn’t take a blind bit of notice!). It’s fascinating to watch the vagaries of the wind’s strength and direction, with all the variations from complete calm to howling gale. We’ve been using a white bin liner and only had to replace it once. 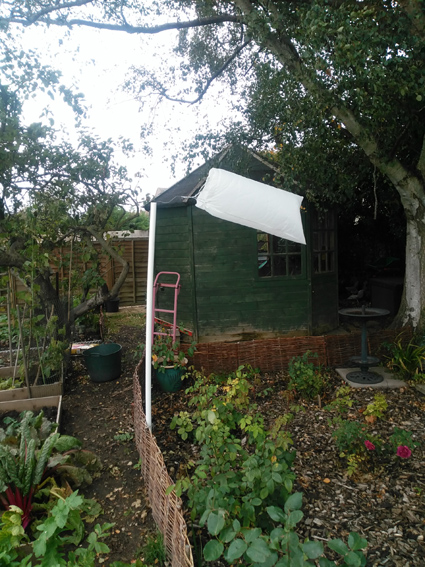 So what does the future hold for gardening over the next twelve months? I don’t know for sure, but I think I can see which way the wind’s blowing …