Alternate chapters of Paris Echo are voiced by each of the two protagonists – Tariq, a bored nineteen year old who decides that he’s “got to get out” and leave his humdrum life in Morocco; 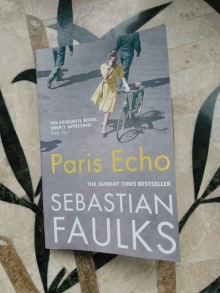 and Hannah, a history student from Boston in her early thirties, who returns to Paris to continue earlier studies there. Inevitably their paths cross and they form a friendship. But the love interest of the story, whilst not entirely predictable and often intriguing, isn’t central to it. For me, it’s all about the vivid descriptions of cultural attitudes (for instance, of French people to Moroccans, as suggested by Tariq), detailed evocations of Parisian sights and the city’s ethos, together with moving accounts of historical events in Paris in the Second World War.

Arguably the book doesn’t need a plot. The narrative centres on insights into the sentiments of the two main characters and the way their feelings are re-shaped by the clash between their very differing backgrounds and the new physical and social environment in which they both find themselves. But the story line has its own strengths.

The idea of character development is exemplified by Hannah and Tariq. But other memorable figures constantly pop up, like an old man called, with irony, Victor Hugo, who presents a kind of Punch and Judy show on the Metro. Indeed there’s a veritable torrent of well-drawn minor characters (which at some points made me quite glad that I was taking notes!).

I found myself often pulled up by some insight or other: history as a backwards extension of the present, for instance; the way chance meetings can shape your life; the number of different ways there are of being alive; and references to the poet Musset, sensual correspondances and the concept of temporal synaesthesia. On the other hand, there were many occasions where I thought “Yes, I’ve noticed that” or “That reminds me of the time …”

The most touching sections of the novel are the (presumably fictional, but factually-based) reporting of audio recordings made by young women who had dealings with the occupying German troops in Paris during World War II. Hannah’s goal is to use some of the recordings to make discoveries of her own and if possible trace the whereabouts of survivors. Transcriptions of the recordings are laid out across many pages, rather like plays within a play. Hannah’s quest for, and meetings with, some of the women is often poignant and revealing. This kind of deep insight into life in wartime is such a strength in much of Faulks’ work, as so memorably demonstrated in his pièce de resistance, Birdsong, of course.

Well, a real tapestry of narratives and a guide to Paris that made me wonder if Faulks hadn’t learned “the knowledge” about Paris and would be able to work as a taxi driver in the city.

At the end, I didn’t want to say goodbye to the pair. But it turns out that it was just a story …