Ian McEwan‘s latest novel, Machines Like Me, is a kind of hybrid, crossing sci-fi with re-written history and a domestic love triangle. It’s also a cracking good read.

The sci-fi stems from the purchase of a totally lifelike robot, called Adam, by the novel’s main protagonist, Charlie. 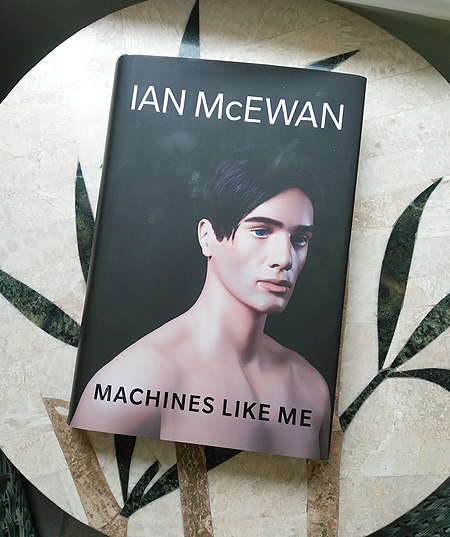 Adam has great strengths in terms of knowledge, artificial intelligence (AI) and analytical abilities, which immediately make him a valuable asset in Charlie’s wheeler-dealering on the stock market. Adam’s inventors have also included a menu of optional character traits, any combination of which can be selected to give him a unique personality. However, these man-made idiosyncrasies spark various unexpected actions and dramatic consequences.

The triangle is completed by Miranda, Charlie’s twenty-two year old neighbour, ten years his junior. Romance quickly blossoms but soon a dark, unspecific threat is hinted at by the artificial human. Miranda, it appears, may not be altogether the innocent young thing she appears …

Time is out of joint in this early 1980s world. The writer takes numerous liberties with the historical record: it’s 1982, but Britain loses the Falklands War, for instance, Alan Turing is alive, well and at the core of a British technological revolution, Tony Benn becomes Prime Minister and at one point Charlie observes that he is the only person on the motorway who isn’t in a self-driving car.

McEwan weaves a network of threads into the fabric of what is actually a fairly simple plot line, giving himself ample opportunity to pose pointed questions about his fictional characters and society in general; for instance, Adam’s (artificial?) relationship with Miranda – is it more or less real than Charlie’s?; to what extent are we ourselves robotic?; how will we deal in the future with machines that are cleverer than us?; do we really have free will? are there different types of human intelligence?; and many others.

Various other strands are explored, and in some depth, so that we get a picture of a fully-realised alternative society, complete with politics, religion, health issues, food and drink, racism, etc..

McEwan’s best trick here is to slip all this thought-provoking material into the story seamlessly, without interrupting the compelling narrative.

I’ve read many of his major novels and this is certainly one of his most gripping and completely ‘on trend’ in confronting issues around AI, at a time when it’s just coming to the forefront of the public consciousness.

Machines Like Me by Ian McEwan is published by Jonathan Cape at £18.99.