Gilbert de Clare was responsible for the construction of a building which played a very important part in my childhood.

Though no-one could ever replace Dylan Thomas as my favourite poet, I’m also fascinated by the life and poetry of John Clare, whose work first came to my attention about twenty years ago. I studied his poems whilst working on my Masters and I’ve viewed the John Clare exhibit at Peterborough Museum on a number of occasions. A visit to his cottage in Helpston, formerly Helpstone, originally in Northamptonshire but now in Cambridgeshire, is on my current ‘to do’ list.

And then there’s Clare Means, a young singer/songwriter based in Santa Monica, California, whose compositions and performances as a musician and busker never cease to entertain and amaze me on most days, together with many of her 62,000+ (at the time of writing) other followers on the Periscope app.

Caerphilly Castle was built by Gilbert de Clare, construction starting in around 1268 and finishing swiftly, for good reason, by 1271.

The castle – a photographer’s dream – dominates the South Wales town of Caerphilly, where I was brought up from about the age of two, having been born in Cardiff. Who needs Disneyland, when you’ve got the second largest castle in Britain on your doorstep? I lived less than 100 yards from the perimeter of this huge, imposing, complicated structure. Before the administrators moved in with their ticket machines, signposts and guide books, my young friends and I were free to roam around this amazing building, exploring every inch, having fantastic battles, building rafts and riding floating logs around the moats, fishing for perch, roach and carp or, late in an autumn evening, squeezing through a crack in the side of a dank, creepy, dripping tower to see whether the ghost of the Green Lady would come out to haunt the ramparts. 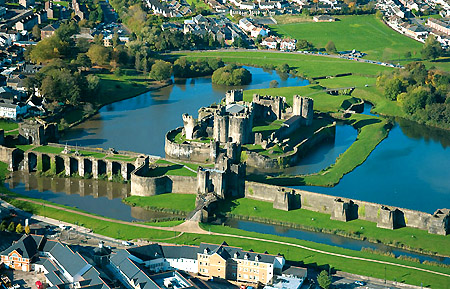 The middle of the thirteenth century was a highly unstable and turbulent time in the history of England and Wales.

Gilbert de Clare, seventh earl of Gloucester, was known as a fiery one, variously called “Red Gilbert” and “the red earl”, not only because of his red hair but also because of his fiery approach to battles.

Although an extremely rich English nobleman who had inherited vast estates, he was caught up in two major power struggles – one between a group of barons (led by Simon de Montfort) and the English king Henry III (the Barons War lasted from 1264-67), and the other between Welsh rebels under the leadership of Llywelyn ap Gruffydd and the King and lords loyal to the King, lords who in the early 1260s were losing control of much of Wales, despite the fact that many had built forts and castles up and down the land, mostly funded by the King. But the King’s problems were compounded in 1264, when Simon de Montfort agreed an alliance with Llewellyn, who by now was threatening to take control of the remainder of Wales.

Whilst de Clare had fought against the King at the Battle of Lewes, a real turning point in the history of British democracy – and subsequently been excommunicated by the pope – in 1264 he changed sides and began to fight on the side of the King. No doubt he saw great danger in the massive progress of the Welsh in taking back so much territory and seemingly threatening his own lands in and around Glamorgan (its Welsh name being Morgannwg). He could have ‘taken the high ground’ and built his castle on the side of one of the valleys in the area. But by building it at the centre point of the Caerphilly basin, he was able to take advantage of the River Rhymney, which flows through the basin, to create defensive lakes (or moats, as they’re known), right around the castle. (The Rhymney, pronounced “Rumney”, is named after the town further up the valley; it’s the one referred to in the Byrds‘ song “Bells of Rhymney“, though their pronunciation is wrong, of course!). 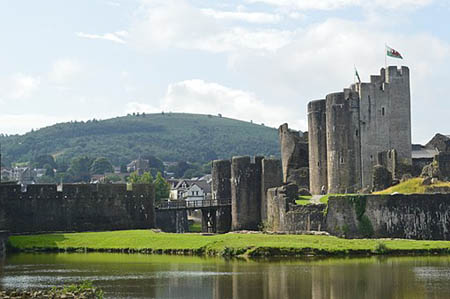 The castle wasn’t only a fortification to protect de Clare and his family, his generals and his soldiers. It was also a home, complete with bakery, kitchens and a huge dining hall. Noblemen in this era enjoyed putting on huge banquets and being regally entertained by travelling minstrels. Had they lived in the area at this time, John Clare and Clare Means might well have found themselves ordered to come to the banqueting hall (see photo below) to entertain de Clare and his guests. Entertainment was a very important diversion for the constantly warring ennobled class. (They often employed ‘silentiaries’ to quieten any unwanted distractions made by their guests – de Clare had no time for trolls!). 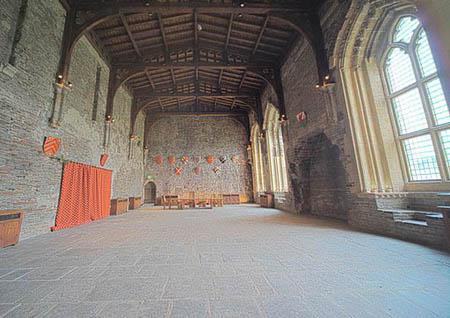 The castle’s massive size and innovative design are not its only distinguishing features. The fact that it was built and paid for by de Clare himself was quite unusual. The bigger castles were almost always funded by the King. With Caerphilly Castle, it appeared that expense was no object: it is reputed to have cost £19,000 (about $US25,000) – an enormous amount of money in those days.

The town of Caerphilly grew up to the south of the castle. The castle changed hands quite a few times as a result of power struggles and religious demands, though ultimately it was passed on to other generations of the de Clare family, including notably to another Gilbert de Clare who was killed at the Battle of Bannockburn. 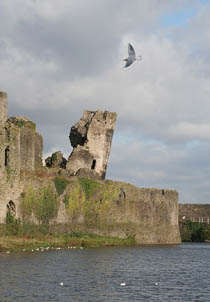 Eventually the building fell into decline. The sluice gates stopped working and much (though not all) of the water drained away from the moats.

But … fast forward … when I was still a young boy, a process of major restoration work began, including the rebuilding of the sluices and a great deal of repair to the fabric of the castle. The moats were re-filled and many of the towers and other features were brought back to their former glory, though not the castle’s famous leaning tower. 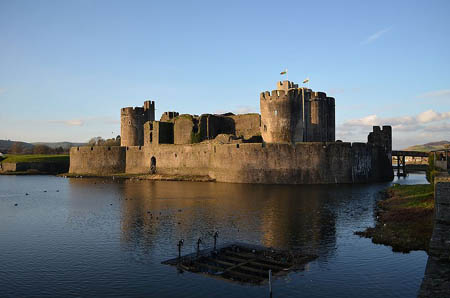 How ironic that a building that had once been a focal point of high drama, intrigue and bloodshed should end up as a playground for children like myself and my friends – and like these young lads, pictured below on one of the restored moats.

All things must pass …

Caerphilly Castle – By LlGC ~ NLW [No restrictions], via Wikimedia Commons